Go for a walk in the community, but leave your microphone behind. Pay attention to where people hang out and how information is shared in popular locations like churches, grocery stores, libraries, community centers, and government offices. Sit down at a restaurant, strike up a conversation, look for local signs posted in the neighborhood. Search for community bulletin boards. The point of all of this is to catch people in their daily comfort zones. Eventually you’ll find ways to share important information through these spaces and networks. 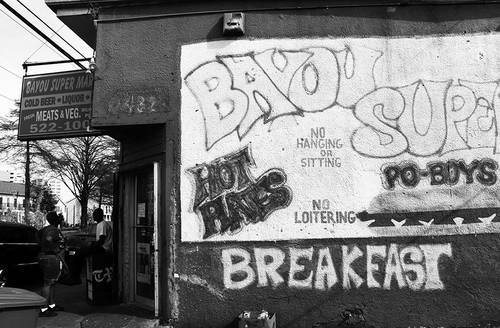 The day after reporter Jesse Hardman arrived in  New Orleans, he went on a walk through the Central City neighborhood without his microphone, and without his notepad. Central City is a tight-knit, historic community in the heart of New Orleans. Hardman stopped into an old barbershop and bought some peanuts, the establishment’s  side-hustle, chatting with the barbers about the neighborhood. He walked past a row of blighted homes, stepping around potholes filled with stormwater. He chatted with the owner of a dance studio about her Mardi Gras dance team. And he talked to customers at a corner store, down the street from a slew of recent shootings. Later that week he went back to the neighborhood and sat in on a church service. The pastor, who had recently died from cancer, was a local advocate for stopping gun-violence, and his death was a big loss to the community, where shootings happen sometimes daily. After the service he spoke about this with the interim minister and congregation members. Later, after all the walking, Hardman entered all of his mental notes in a Google document.